The cultivation of Arisaema

The methods described below are particular to the conditions we have at Redhall and might well need to be modified for other areas.

The genus Arisaema grows from tubers which are very wet intolerant. i.e. care must be taken that the tuber does not become waterlogged, particularly in the dormant, winter season. They are also rather unusual in that the the roots grow from the top of the tuber rather than the bottom.

One common tip for species of doubtful hardiness is to plant them deep; about 12" to 18". I've tried this and still lost the the plant. I've also been told by a nurseryman that, if you've grow plants from seed that have been raised locally, this isn't necessary. Presumably any frost tender plants have been killed off and what remains is hardy for your area.

The Arisaema at Redhall

Redhall stands on terminal moraine at the mouth of the Angus Glens. There is a limited amount of top soil; as thin as 3" in some places, which lies on a stony sub-soil which, in turn, lies on moraine deposits. This results in an extremely well drained soil which holds little nutrient.

We have sought to counter the latter defect by incorporating leaf-mold and garden compost in the cultivated areas to help preserve nutrients. With regard to the growing of Arisaema, the top-soil of the area concerned is dug up and set aside. When a sufficient depth is reached for the tuber, the sub-soil is broken up with a spade, (or sometimes a pick or crow-bar!), and the base of the tuber placed on this freely draining layer. The excavated top-soil is then mixed with garden compost and BFB meal and placed back in the hole so that the Arisaema roots are growing in a nutrient-rich layer but the base of the tuber is well drained.

We are also planning to grow some of the collection in a group of old sinks at the east of the house, (see the Overview, east:green area). These originally each held a dwarf conifer, a prostrate willow and various alpines but the willows and the alpines have long gone due to the increase in shade as the eastern boundary hedge has matured. The conifers will be re-located as, dwarf or not, most of them are now far too big for their containers.

The sinks have three inches of gravel placed in the bottom on which the base of the tuber will be set and the sink will then be filled with a mixture of two parts of re-hydrated coir, two parts sharp sand and three parts four year leaf mold. Each sink is fitted with a loop of Leaky Pipe for any watering that is needed, (see images below). 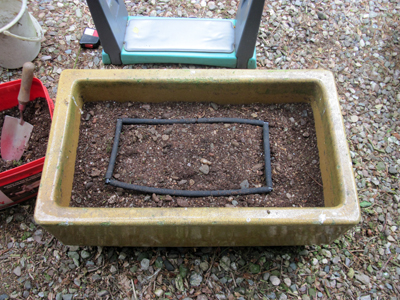 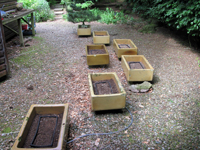 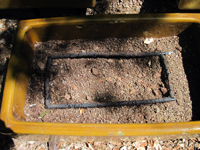 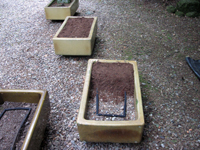 Update: 2021  Some of the species planted in the lower area of the garden have rotted * due to there being too much compost/leaf mold in the soil.

This area will be left alone and future acquisitions will be planted in the sinks mentioned above or in the upper part of the garden where other species are thriving.

* The partially rotted tubers were cut back to sound tissue with a scalpel, dusted in Flowers of Sulphur and replanted. [We shall see!]