The definitive text on Rowans is "The Genus Sorbus, Mountain Ash and other Rowans" by Dr Hugh NcAllister [1]

However, this is a Botanical Magazine monograph and as such is a scientific document with perhaps limited appeal to the average gardener. Therefore, as we believe this website will be viewed more by gardeners than by Botanists, we will describe our collection on the basis of garden suitabliity rather than botanic interest.

Some years ago an attempt was made to separate the Rowans from the Whitebeams by making the genus Sorbus include only the pinnate leaved species and giving the Whitebeams their own genus of 'Aria'. Unfortunately this division hasn't been widely adopted but was assumed in GSMAR. On our website, 'Sorbus' and 'Rowan' are used as synonyms.

Dr McAllister breaks the genus down into two main groups, the subgenus Sorbus, those with orange, red or yellow fruits, and the subgenus Albocarmesinae, those with white to crimson fruits. Thereafter, each subgenus is further divided into sections named for a typical species.

We believe that berry colour is one of the main attractions of Rowans as garden plants, (the other being their Autumn colour), and so we keep to the basic subgenus classification in these pages but largely ignore the various sections.

Until we bought a white berried Rowan from the Liverpool University Botanic Garden at Ness, we weren't aware that Rowans came in anything other than red. This plant and Dr McAllister's booklet, "The Rowan and its Relatives", was the start of our interest which has led to the present collection.

The terms 'diploid' and 'tetraploid' refer to the chromosome count of the plant: in simple terms tetraploids will come true from their seeds whilst diploids propagate sexually and so may give hybrid seedlings.

The descriptions that follow are of a limited part of the collection and are intended to highlight those plants of a particular berry colour which we think are suitable for different sizes of garden. The full list of our trees can be found by accessing the database or the planting maps for the garden and Ford field.

For the full database information on one of the types mentioned below, click the beige button,

No garden is complete without a Sorbus aucuparia, the Scots Rowan of legend, essential for the repulsion of witches.

However, other red berried Rowans worthy of consideration are shown below. 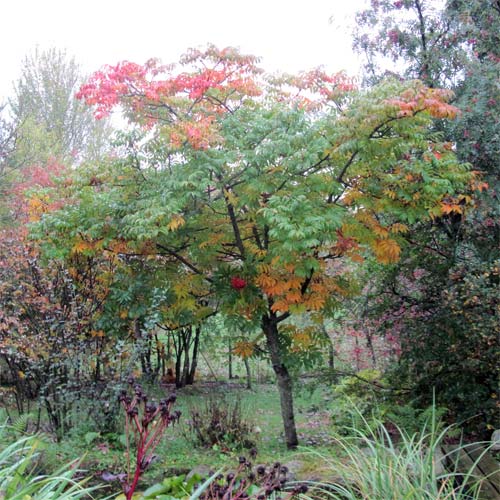 S. sargentiana Autumn colour
Sorbus sargentiana grows to a medium sized tree which is suitable for all but small gardens. It's downside is that it's a sexual species and it will not necessarily flower each year. 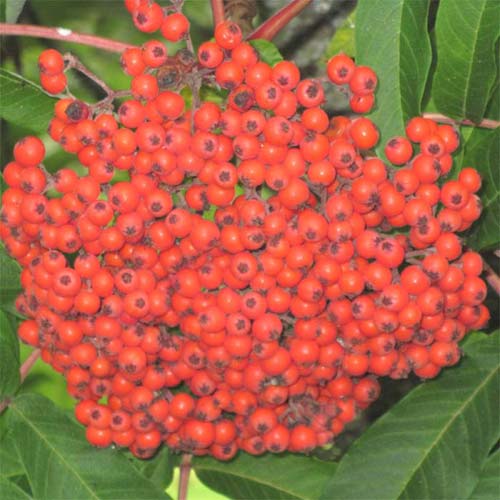 S. sargentiana berries
It forms large bunches of red berries which are left by birds a little longer than most red Rowan fruit.
Sorbus commixta

Sorbus commixta grows to a medium to large tree which is suitable for all but small gardens. It's also a sexual species but flowers more frequently than Sorbus sargentiana.
It forms bunches of red berries and it is the parent of a number of cultivars selected for their autumn colour.
Orange berried Sorbus

The best orange we know is Sorbus californica which has the advantage of being tetraploid but whose berries end up scarlet as they ripen.

Sorbus californica resists attempts to grow it as a standard and is happiest as a small bush of about 8' after 10 years. 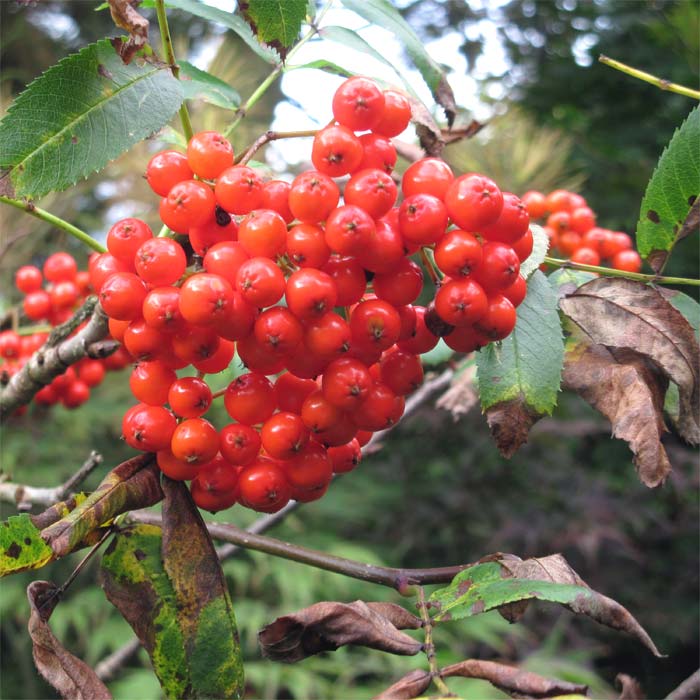 S. californica berries
The berries are the earliest of all to ripen; being ready by the start of August and gone by the end of the first week!
Yellow berried Sorbus

Yellow berries are usually carried by a form of a particular species rather than a species itself. The most common is perhaps S. 'Joseph Rock' which is now thought to be a hybrid between S. commixta and S. monbeigii. Even 'though this is a hybrid, the fruit is fertile giving seedlings with fruit from pale lemon to orange.

If 'Joseph Rock' is a little pale for you, S. aucuparia fructo-lutea has bright yellow fruit. 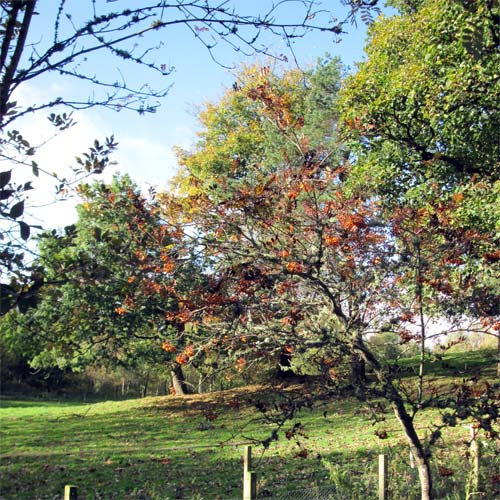 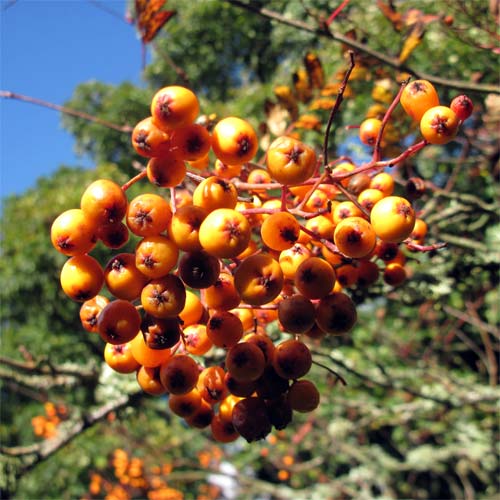 S. aucuparia fructo-lutea berries
Like most yellow berries, these are less atrractive to birds than the red form.
Pink & white berried Sorbus

The pink and white berried plants are less easily defined than the red in that some start off with pink fruit which gradually changes to white, some start pale pink and deepen their shade with time and a few are pink or white all the time. 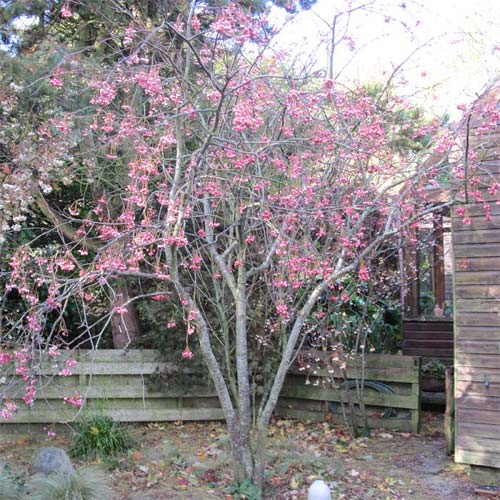 S. rosea general view
Sorbus rosea, formerly known as the 'Pink Kashmir' Rowan, is the pink berried relative of S. cashmiriana and shares with that tree the distinction of having the largest berries of all Rowans and is one of the few to have pink rather than white flowers. 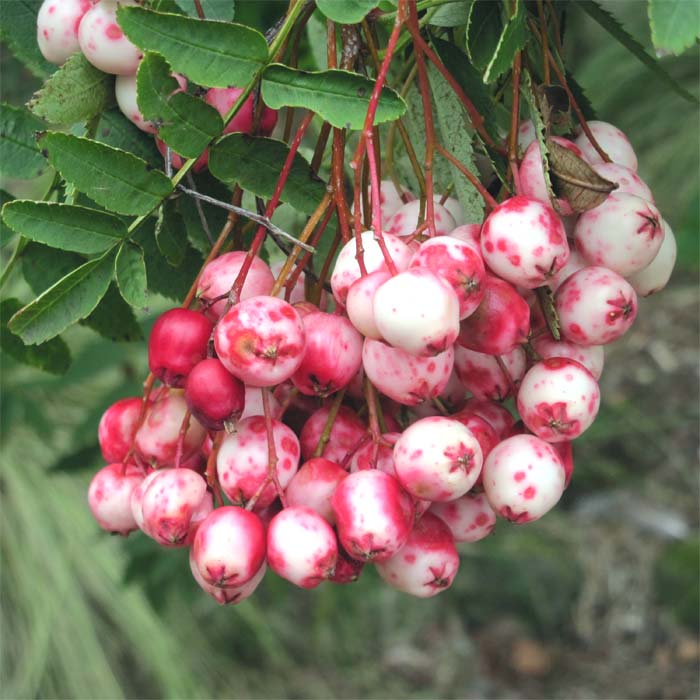 S. rosea berries
The tree shown at the left is only 10' tall at twenty years of age and so is suitable for all sizes of garden. It's marketed as Sorbus 'Pink Ness'. 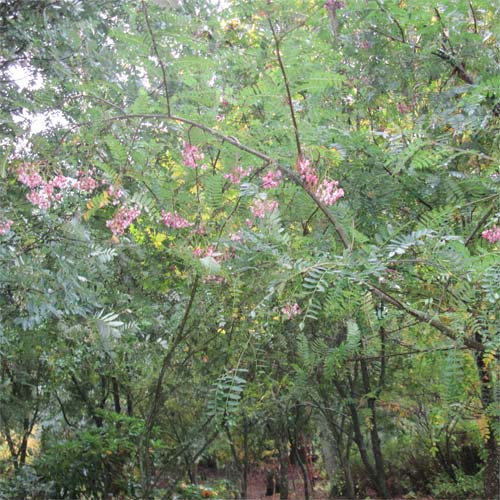 S. koehneana general view
The designation, Sorbus koehneana, covers an aggregate of trees with differing berry colour from the pure white of the type to the deep magenta of Sorbus koehneana pogonopetala. It is a small tree or shrub which, again, will fit in any garden. 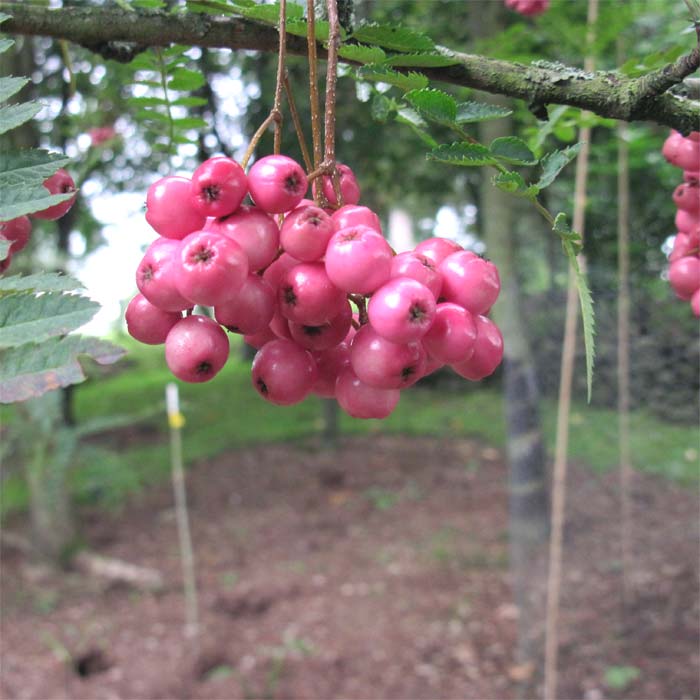 S. koehneana berries
This version, a collection by the Coxes of Glendoick, has beautiful, pearly pink berries. I think it's marketed by Glendoick as Sorbus 'Glendoick Pearl'
Pink-white, white-pink

Sorbus reducta, is the second smallest Rowan, growing to no more than 3' and usually not much more than 18". It is
It has pink berries which fade to nearly white and is widely available from good tree nurseries. It is rhyzomatous but spreads quite slowly so can be easilt kept in check.

Sorbus psuedohupehensis, is a widely grown tree which is usually, (incorrectly), sold as S. hupehensis. It is a tree which can grow in time to 40' so is not suitable for a small garden.
The berries are more pink when exposed to the sun but go paler in the shade.
Whites

Sorbus cashmiriana forms a large shrub or small tree which will grow to about 8' in ten years. 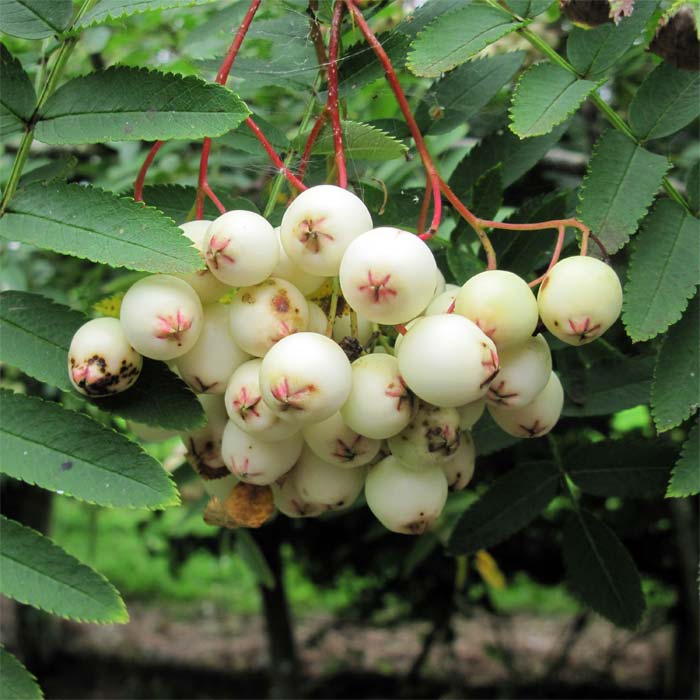 S. cashmiriana berries
Sorbus cashmiriana, along with its close relative Sorbus rosea, has the largest berries of any Rowan. 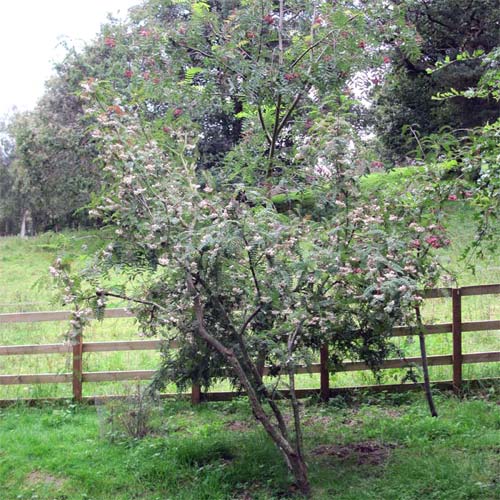 S. frutescens general view
Sorbus frutescens, grows as a small shrub of about 6' after ten years. It has the advantage of being one of the quickest Rowans to bare fruit. Most plants will flower in their third year and some of our seedlings have done so in their second year. 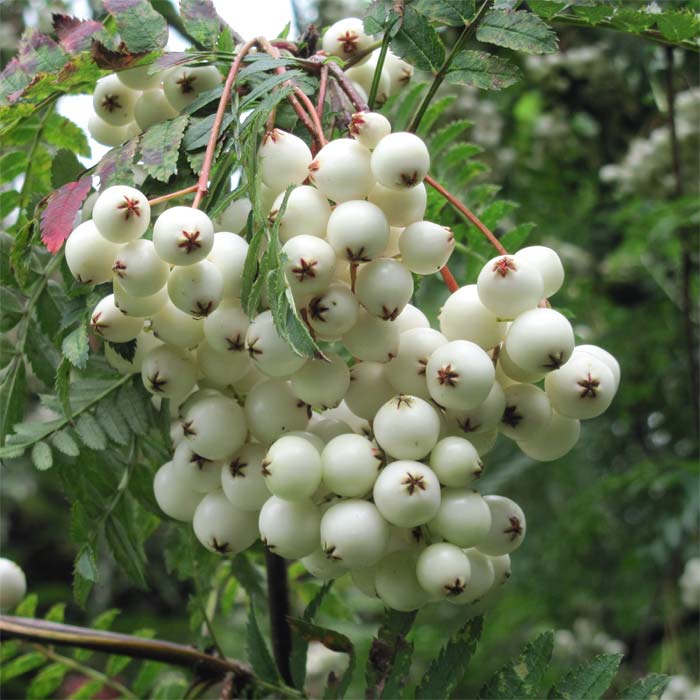 S. frutescens berries
The berries are pure white and are some of the last to be eaten by birds.

Click a link to see the current plant database, or maps showing the Rowans' positions either in the garden or a near-by field.