The propagation of Sorbus

As mention previously, commercial plants are usually grafted. If this is beyond you, (as it is me), then Rowans can be grown from seed or cuttings which will give a better approximation to the wild plant as they will be on their own roots and not prone to the problems described for grafts. It's also been suggested that they are more vigorous and drought tolerant. [1]

The tetraploid or apomictic species will come true from seed. Whereas those from the sexual, diploid species may or may not depending on which plant fertilsed the seed.

This doesn't mean that it's not worth growing the seed of diploid species; S. aucuparia is a diploid whose seed almost invariably comes true, presumably because they usually only have other aucuparia around them. However, if you grow a variety of Rowans you may well produce a new, garden-worthy hybrid.

It's also worth growing seed from cultivars and hybrids. They may not come exactly true to the parent but you are liable to find some pleasant variations.

As many of the berries are attractive to birds, steps need to be taken to preserve them on the tree until they're fully ripe. 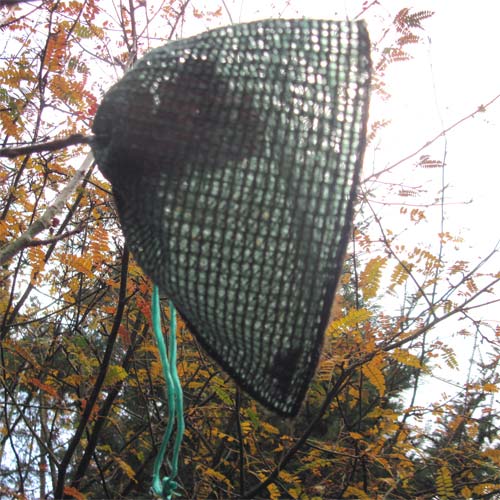 Berry bag
I enclose a bunch of berries in a draw-string bag made out of wind-break mesh. This allows the berries to ripen without letting in small beaks.

In some cases you can just plant the berry in compost but some authorities believe that the flesh of the berry has an inhibitory action on the germination and is best removed. [2]

For soft fruit I rub them in a metal mesh sieve with the back of a wooden spoon under running water. This not only removes the seed from the berry, it'll also give them a mild dose of scarification. For those few species whose fruit never gets very soft, the only way is to cut them open and pick out the seeds by hand.

Some Rowan seed will germinate in the spring after it's ripened with no other treatment, but a number of species require stratification, otherwise known as 'cold treatment' to break the dormancy of the seed [3].

In either case, seedlings should be potted up as soon as they have a pair of true leaves. Don't be put off if the young leaves don't look like those of the parent tree. Most Rowan seedlings look like aucuparia! When they have developed a substantial root, add some Mycorrhizal fungi [4] to the roots at the next potting up or when they're planted out.

This is the time when you have to decide the form of the tree. If you want to grow standards, cut off all but the most vigorous shoot and keep trimming any lower shoots as the plant grows.

Let's not forget the birds

It must be remembered that, whilst the birds eat your berries, they don't digest the seed. The flesh is removed from the seed, it's given a mild scarification as it travels through the bird's digestive track and it's then deposited on the earth with a dollop of fertilizer.

The only problem is that the birds don't label the seeds they plant so, if you have a number of Rowans, you have to weed out the ones that occur naturally,

Few Rowans are particularly easy to grow from cuttings. The following suggestions should aid success.

I've found that Rowan cuttings take from 1 to 3 months to root. When a rooted cutting is first potted up, sprinkle some Mycorrhizal fungi over the roots as mentioned above for seedlings.

I use a mist propagator for my cuttings and I think that some species of Rowan would be very difficult to root without this. Details of various methods of propagating cuttings can be found here and at a variety of other sites.